Amongst the many nations in the world, UAE is the one making news with its intent to advance in the field of next-gen technologies. While the “Museum of the Future” made headlines a few months back, the new initiative by the UAE government called the Coders HQ is another one making waves in the world of coding and technology. Both the initiatives are meant to foster the interest of the new generation in the advancing technology while introducing concepts of the future to the public at large.

The Museum of the Future

The Museum of the Future is an architectural marvel in itself being built in the shape of a Taurus shell in stainless steel and has achieved the rating of LEED Platinum, the highest amongst the sustainability standards. Officially opened in February 2022, the Museum has showcased several futuristic exhibitions so far such as Artificial Intelligence, Climate Change, Augmentation of human body and mind, Robots with feelings, etc. These are concepts that might seem inconceivable to the masses in general right now, but are being worked upon and might see an emergence in near future. The museum aims towards fostering solutions to future problems while bringing great minds from the varied field of research, invention, design, and finance under one head. One of the exhibits in the Museum of Future is “Today Tomorrow” which presses on the environmental challenges faced today and the probable solutions to these challenges. For instance, the newly discovered Notpla, a biodegradable material that is slotted to replace plastics in the near future, or ways to permanently lock carbon dioxide to limit the carbon emission into the atmosphere.

Not just being a museum or an exhibit, The Museum of Future also aims at serving as headquarters for the Great Arab Minds Fund. This is a five-year initiative that aims towards funding exceptional Arab talents in the field of science, philosophy, and innovation, inspiring young minds and generations to do the same. the Government of Dubai is offering AED 100 million ($27.2 million) for this initiative.

What is Coders HQ?

Keeping true to their ideology of expanding their technological base, UAE has now announced the launch of their newest initiative called the Coders HQ. Coders HQ is a part of the National Program for Artificial Intelligence. The entire initiative aims towards having coders from all over the world come together under one roof and work towards achieving great heights in the field of coding. Developed in partnership with more than 40 tech companies worldwide and in UAE, the initiative will be a breakthrough in inviting the new generation to learn to code and foster their skills in technology. The initiative aims at bringing the required knowledge and information along the lines of coding and technology to interested people from around the world, providing them the opportunity to learn, and develop at the same time.

Why is it formed?

His Highness Sheikh Mohammed bin Rashid Al Maktoum is the one with a futuristic bent of mind and can be given all the credit for these new-age initiatives being launched in UAE. According to Omar bin Sultan Al Olama, the Minister of State for Artificial Intelligence, Digital Economy, and Teleworking Applications, the main aim of the initiative is to bring UAE onto the world map for the digital economy and become the global hub for start-ups, talents, and innovation.

Coders HQ is a part of the National Program for Coders and involves providing coders with a supercomputer, workspaces, and space for events. The plan includes the launch of six other Coders HQ around the UAE that will be inaugurated in near future. The main objective of the program is to assess the coding skills of the coders while developing them further and getting them in touch with coders across the world. Several big names in the field of technology such as Meta, IBM, Microsoft Middle East, Africa, DP World, VMware, LinkedIn, Amazon AWS, Cisco, etc have joined hands to provide the necessary skills and training to the coders under this initiative.

So far, ten initiatives have been launched under the scheme of Coders HQ with the aim of becoming the highest number of coders per capita in the world. Several Hackathons and live events have been introduced for the benefit of coders. Some of these initiatives are:

These initiatives make use of LinkedIn statistics, providing challenges with Majid Al Futtaim, Collaborations between Emirates, and Evaluation Headquarters, which provide coders with unique opportunities and career options; Global DevSlam which helps in empowering coders in UAE (approximately 15000 of them).

These initiatives aim at building UAE as a hub for programmers, thus enhancing the digital economy.

According to a study by recruitment firm Michael Page, the most rewarding jobs in the global market require writing code, creating mobile applications, and developing computer software. These jobs are the best-paid jobs and can considerably enhance the digital economy of the UAE with the help of these newly launched initiatives. Coder HQ initiative is aiming towards training more than 100,000 coders and establishing 1000 technology companies that function on a global platform. The government also aims to enhance investments in these companies from Dh 1.5 billion ($408 million) to Dh 4 billion ($1 billion), as said according to Sheikh Mohammed. A dedicated coding school and collaboration with global companies to train and teach students about coding is an extension of the National Program of Artificial Intelligence. 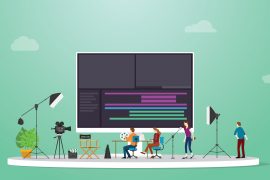